The mission is obvious: Don’t overthink it. That’s evident in the urgent garage-pop perfection on Phantastic Ferniture’s self-titled debut album, and in the unconventional path the band has taken to releasing it. Phantastic Ferniture is the project of old friends Julia Jacklin, Elizabeth Hughes, and Ryan K Brennan, who wanted to shake the shackles of their meticulously crafted solo work to experience a second, giddy adolescence.

“I’d gone straight into folk music,” says Jacklin, “so every experience I’d had on stage was playing sad music with a guitar in my hand. I thought, I would love to know what it’s like to make people feel good and dance.”

Phantastic Ferniture’s spiritual home may be the garage but they were born in a bar, specifically the hallowed basement of Frankie’s – a beloved pinball and pizza shop in Sydney. One late night in 2014, on Jacklin’s birthday, a group hug manifested amid the pinball machines, with all ten participants vowing to form a band. “Only four of us remembered the next day,” notes Hughes.

United by fern puns and a love of leisurewear, the band met up whenever schedules would allow, writing songs and playing smatterings of dates to an increasingly devoted audience. Eventually, it was decreed that this was no side project and an album should follow.

“It feels really good,” Jacklin says with satisfaction. “It’s like having an alter ego.” 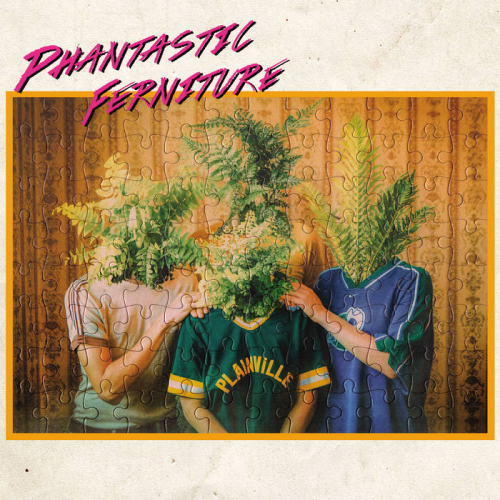