Meaning all things magick and supernatural the root of the word occult is that which is hidden, concealed, beyond the limits of our minds. If this is occult, then the Occult Architecture of Moon Duo’s fourth album – a psychedelic opus in two separate volumes released in 2017 – is an intricately woven hymn to the invisible structures found in the cycle of seasons and the journey of day into night, dark into light.

Offering a cosmic glimpse into the hidden patterning embedded in everything, Occult Architecture reflects the harmonious duality of these light and dark energies through the Chinese theory of Yin and Yang.

In Chinese Yin means “the shady side of the hill” and is associated with the feminine, darkness, night, earth. Following this logic Vol. 1, embraces and embodies Moon Duo’s darker qualities – released appropriately on February 3rd, in the heart of winter in the Northern Hemisphere.

Yang means “the bright side of the hill” and is associated with the male, sun, light and the spirit of heaven and as such Vol. 2 explores the light and airy elements of Moon Duo’s complex psyche, and will be released in the spring as the darkness of winter is replaced by the appearance of new life.

Written and recorded in their hometown of Portland, Oregon, the two-part epic reflects the hidden energies of rainclouds and sunshine and the deep creep of Northwest forests along with their effect on the psyche, inspired by the occult and esoteric literature of Mary Anne Atwood, Aleister Crowley, Colin Wilson, and Manly P. Hall.

According to guitarist Ripley Johnson, “the concept of the dark/light, two-part album came as we were recording and mixing the songs, beginning in the dead of winter and continuing into the rebirth and blossoming of the spring. There’s something really powerful about the changing of the seasons in the Northwest, the physical and psychic impact it has on you, especially after we spent so many years in the seasonal void of California. I became interested in gnostic and hermetic literature around that time, especially the relationship between music and occult qualities and that fed into the whole vibe.”

Adds keyboardist Sanae Yamada, “the two parts are also intended to represent inverted components of a singular entity, like two faces on the same head which stare always in opposite directions but are inextricably driven by the same brain.”

Sonically the new records represent a dimensional shift in perspective for the band. Just as the season of autumn represents letting go in the form of trees shedding leaves, so Occult Architecture is a shedding of genre tropes, and an inviting in of new textures and soundscapes reflective of the album’s shimmering Yin/Yang qualities. Intricately structured, it is threads, fragments and traces rather than the direct influences that are heard. Yet listen carefully and clattering of bongos reminiscent of Popol Vuh, the fuzzy synth grind of Throbbing Gristle, the no-fi guitar of Chrome and the echoing infinity of Achim Reichel might all be discerned.

More fragments, threads and traces are apparent in the form of the haunting and trance-like vocals which whisper and wail in between. Meanwhile, a deep interest in synthesis is evident throughout, especially in the keyboard work of Yamada: “I try to employ synths in a really visceral way – so they sound alive and kind of violent at times. On this record I wanted the synth parts to be like textural animals that writhe around one another and react to their surroundings.”

The rhythm and drum duties on the recordings fell to regular tour drummer John Jeffrey, who weaves into the pattern spooky percussion and funk-inspired electro-acoustic beats.

The albums were mixed separately with longtime collaborator Jonas Verwijnen, in different locations further expanding the album’s duality further; Vol. 1 in Berlin and Vol. 2 in Portland.

The result is a journey from darkness into light and from the shady side of the hill and back to the sunny side, reverberating with all that is eternal and infinite in the endless and mysterious architecture in which both sides harmoniously exist.
In a nod to a great pop tradition, the lead single, “Animal,” will appear as the A-side of a 7-inch, packaged with each copy of the vinyl edition. The song has an early West Coast punk viciousness to it that is entirely unique to the Moon Duo catalog, and it will also appear as the last track on the CD and digital versions.

To further coat the album with an air of uncertainty and tension, the duo decamped to Berlin to mix with Finnish beat-meister Jonas Verwijnen of Kaiku Studios. There in a counter-intuitive act of creative catharsis, they managed to dissolve the album’s formal technique into a cool and paradoxically sane sound of confusion.

The result, at the end of the trip, is the album Shadow of the Sun. 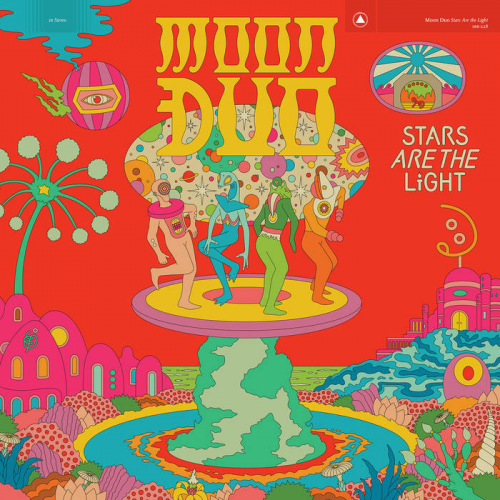 Moon Duo Stars Are the Light 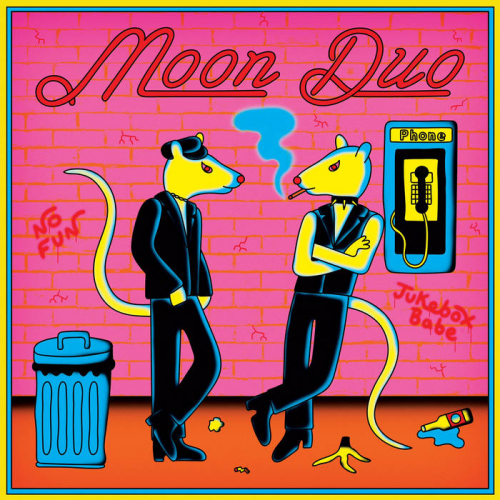 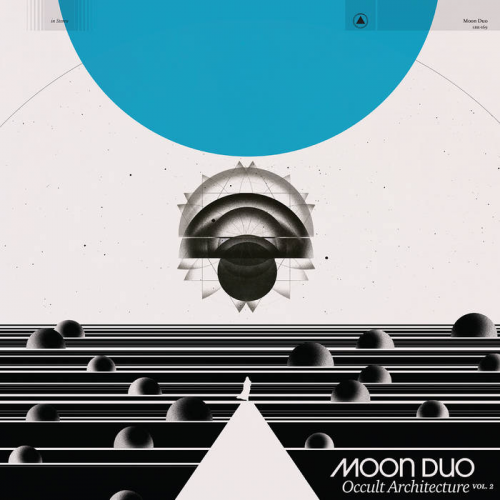 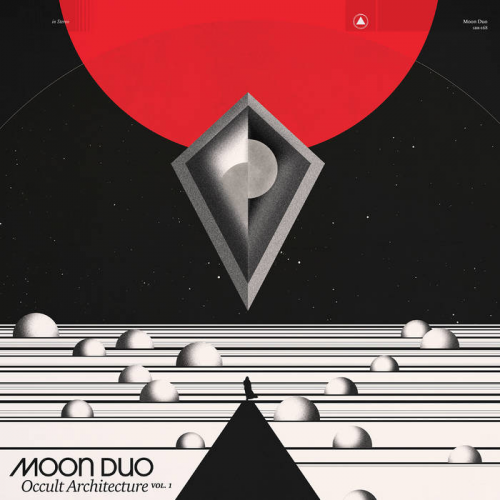 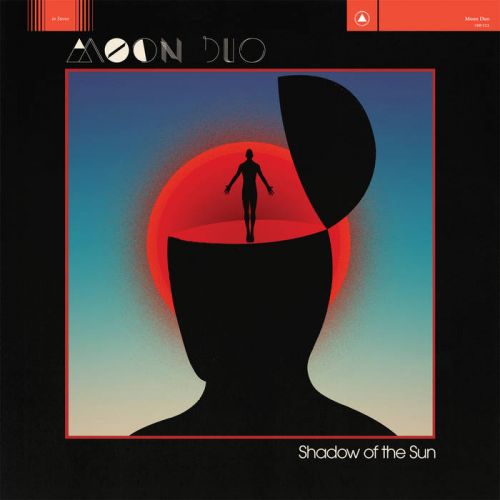 Moon Duo Shadow of the Sun 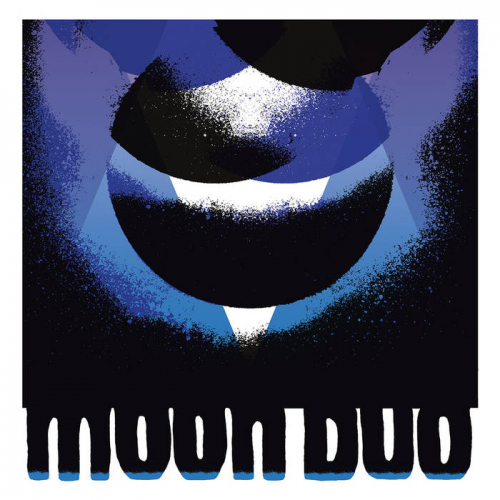 In the Sun
Mazes
Free Action
I Been Gone
Motorcycle, I Love You
Goners 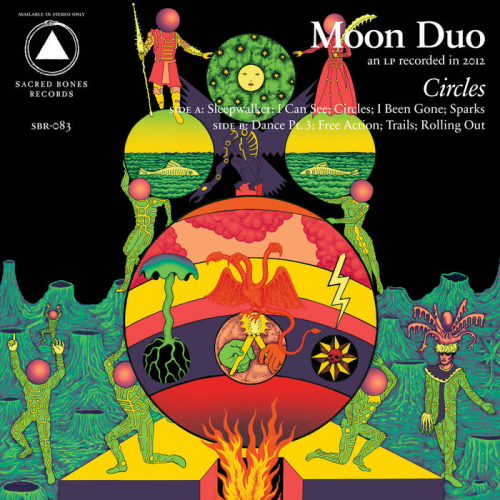 Sleepwalker
I Can See
Circles
I Been Gone
Sparks
Dance Pt. 3
Free Action
Trails
Rolling Out 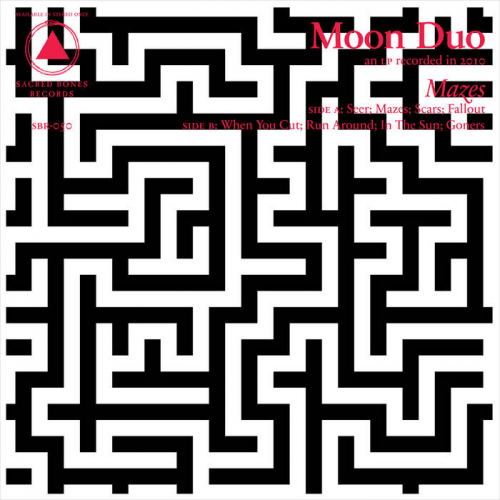 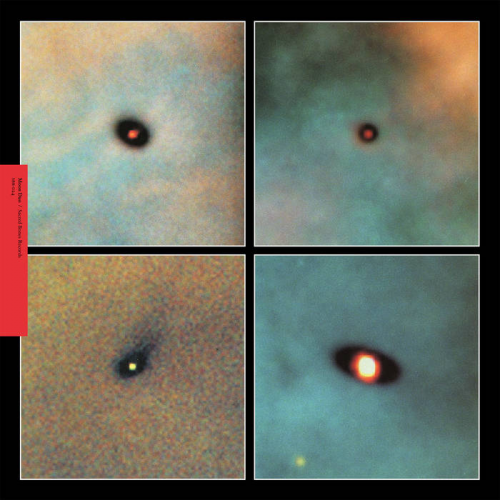