The first thing you might notice about Hospitality’s sophomore album Trouble is what you don’t hear. The process of completing Trouble was, for the band, one of learning to accept silence, to let that empty space exist no matter what it might awaken or evoke. You could catch glimpses of these dark and unexplored places in the margins of Hospitality’s 2012 self-titled debut, but they are at the very heart of Trouble. If you listen closely, you can hear a band pushing against their own boundaries and limitations until they find the very air around them subtly but perceptibly changed.

The trio of Amber Papini (guitar, vocals), Brian Betancourt (bass), and Nathan Michel (drums) approach Trouble with the force and unity of a well-rehearsed touring rock band. They supplement their performances with strategically placed strings, synthesizers, and drum machines. But silence is an inescapable force on Trouble, an invisible fourth player that draws you into the unexplored corners of familiar sounds: the full, ghostly decay of a reverb tail, the round pluck of a bass string, the exact syllables where a doubled vocal line diverges.

In its lyrics and its musical construction, Trouble is an album that wonders about the mysteries that lurk just beyond our field of vision. Slyly and sympathetically, Papini ponders a Saturday afternoon fishing trip as a wrenching interplay of life and death, the perfect blue sky at an air show as a setting for a soured romance. Papini elaborates: “Most of the songs are about everyday environments that arouse anxiety or unease. The ocean isn’t meant for people; we aren’t supposed to be there, and some of the animals that live there are much bigger and faster than we are in the water. I think a lot of the songs deal with this ‘out of place’ kind of theme, feelings of unease and the questions of what is under you or what surrounds you.”

Trouble creates a space where conflicting sentiments and experiences are given room to coexist, where small and seemingly mundane observations pose big questions that hang in the air, unanswered and unanswerable. With a title referencing the artist’s endless struggle in the battle between creativity and outside forces, Trouble also explores the universal themes of loss, love, and loneliness with Papini’s trademark wit. Lines like “And if I’m lost and low / And need you / I’ll disconnect the line” from “Inauguration” somehow make the ultimate kiss-off seem charming, while nature makes clear the loneliness felt when leaving someone you love behind in these lines from “I Miss Your Bones”: “And all the stars will / Twinkle in the midst of a sea / Of black and lonely /An everlasting loss lack abyss.”

It’s fitting that the album was hashed out in band practices that blurred the boundaries between work and leisure, darkness and light, creative collaboration and friendship. Foregoing the usual nighttime hours kept by musicians, the band chose to work on these songs during daily morning rehearsals that proved in many ways more demanding than characteristically relaxed nighttime gatherings. Through these sessions, the band sought to take their music as far as they possibly could as a three-piece, to make sure that every small gesture fell into place and played a vital role in constructing the shape and feel of the songs.

The band carried this daylight-infused clearheadedness with them into the studio with chief arranger Nathan Michel and engineer Matt Boynton acting as co-producers. Nathan describes the process: “We really wanted to avoid the ornamental, but I always like to add more sounds. Matt was helpful in keeping the arrangements as simple and direct as possible. We all wanted the record to have a warm and open sound.” When put to tape, some of the songs for Trouble worked better than expected as fierce and focused trio performances, while others called for more substantial reimaginings. “I Miss Your Bones” emerged almost entirely from a live performance, while “Inauguration” found the band ripping apart their live arrangement and reconstructing the song with drum machines and synthesizers.

The album unfolds like a walk on the beach or a journey to a place you didn’t know you were going. Perhaps a darker sound overall, but Trouble begins with the trademark Hospitality pop then unfurls to reward the listener with the more expansive stripped-down instrumentation of side B. And here, again, is that distinctively present silence, creating a space where an undulating synthesizer feels as alive and mysterious as a single voice in a room. 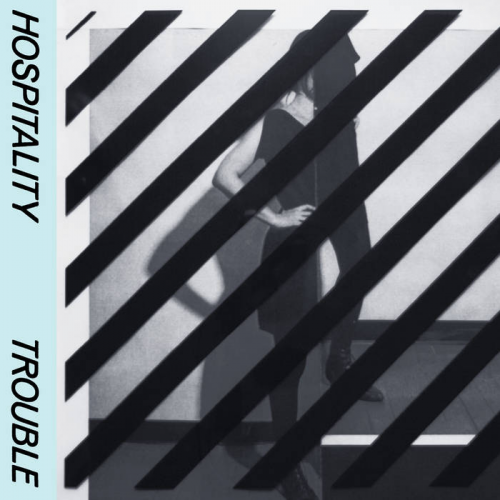