Das Damen were one of the more metallic acts in the legendary SST stable, melding ’60s psychedelia and heavy acid rock with the noisy, punk-derived alternative rock typical of the label. Instead of delving into screaming white noise along the lines of labelmates Dinosaur Jr., Das Damen preferred warm, trippy, high-volume distortion. Their early material was given over to improvisational jamming, but as they developed their songwriting, they threw in more complex rhythms and time signature shifts. Taking their name from the German term for “ladies,” Das Damen were formed in New York in 1984 by vocalist/guitarist Jim Walters, guitarist Alex Totino, bassist Phil Leopold Von Trapp, and drummer Lyle Hysen. The group released its six-song, self-titled debut EP in 1986 on Thurston Moore’s Ecstatic Peace label; it was quickly picked up by SST, which was also Sonic Youth’s label at the time. Das Damen’s first full-length for SST was 1987’s Jupiter Eye, a highly improvisational record that nodded to the spaced-out acid jams of the late ’60s and early ’70s. The follow-up, 1988’s Triskaidekaphobe, was a more structured and melodic hard rock album, but its follow-up, the Marshmellow Conspiracy EP, achieved far more notoriety. One of the four tracks, “Song for Michael Jackson to $ell,” was actually a straight-up cover of the Beatles’ “Magical Mystery Tour,” credited to the members of Das Damen to protest having to pay Jackson royalties (Jackson had just outbid Paul McCartney for the rights to the Beatles’ entire catalog). Jackson’s lawyers got wind of the stunt and ordered all copies of the EP (pressed on pink vinyl) removed from distributors’ warehouses and destroyed. SST later reissued the EP in a three-song form, but the controversy helped spell the end of Das Damen’s career with SST. The band moved on to the Minneapolis-based Twin/Tone label and released Mousetrap in 1989. Although it boasted more polished production, it failed to make any inroads at college radio. Das Damen recorded one further album, the 1990 live set Entertaining Friends, which was performed at CBGB’s and released on the German label City Slang. In 1991, they moved to Sub Pop for a one-off single, “High Anxiety,” but subsequently disbanded. 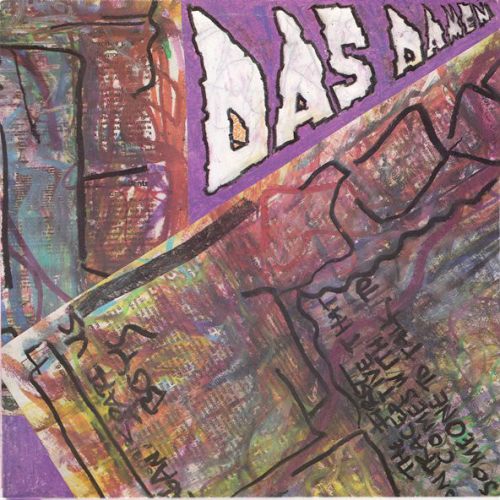