Color Green is an American cosmic rock and roll duo made up of Noah Kohll and Corey Madden. The fleet-fingered guitar gurus formed the group in 2018 after jamming their way through a lengthy modal excursion into a particularly kaleidoscopic stretch of the astral plane. Their debut, self-titled EP arrived in 2020 on Maximum Exposure after two long, strange years spent recording and performing in strange, mysterious spots of the Californian desert and worshipping nightly at the altar of Jerry Garcia.The Color Green EP is 20 minutes of lysergic, countercultural Americana haze where tendrils of weeping steel guitar drip through latticeworks of quicksilver guitar leads under dozy stacks of cloudy vocal harmonies. Produced entirely by Kohll, the four track EP was recorded on a Tascam 488 at various locations across the country and features a cast of freaks: Coley Gold, Alex Amini, Eric Carney and John “Catfish” DeLorme.In every sonic crack an electrified static pervades like the ghosts of cross-continental radio that once carried the downtempo melancholy of Nashville country ballads to technicolor streets surrounding Haight Ashbury. Like the cotton comedown after a potent tab of Orange Sunshine, this record is a gentle melter. 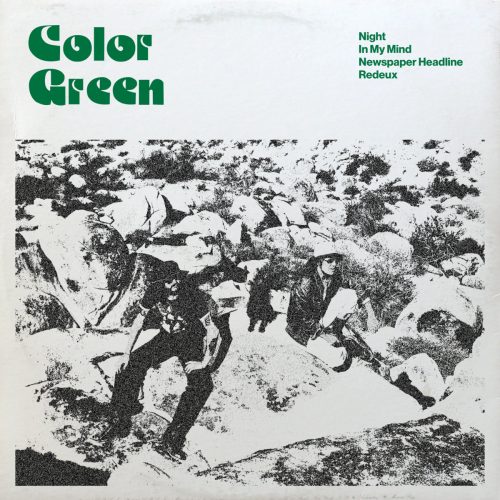