“In a strange way, pimento cheese kind of saved my life and turned things around for me.” While this sentiment may sound like Apex Manor frontman Ross Flournoy is just trying to be amusingly aloof, there’s a distinctive nugget of truth in his assessment of what guided him through an extended period of difficulties and successfully out the other side with everything he needed to craft his newest album, Heartbreak City (out May 31 on Merge Records).

Requiring less than two weeks of studio time to complete, it’s accurate to say that Heartbreak City was captured more than it was recorded due to the “everybody in the same room” live sessions featuring Flournoy on guitar and vocals, Dan Allaire (The Brian Jonestown Massacre) on drums, and Rob Barbato on bass and production duties. The raucous result is an 11-song sonic spectacle that cleverly balances aggressive Dinosaur Jr.-esque guitars with dreamy synth work that’s reminiscent of The Cure, all mixed together with spirited instrumental performances, nuanced melodicism, and lyrics that swing wildly between being cryptic and being profound. In short, it’s everything there is to love about early ’90s pre-commercialized alternative rock but with a refreshingly modern absence of pretense or nostalgia. “Conceptually, the record really explores variations on the theme of rejection and the different ways people react to it, especially the isolation—either by choice or by circumstance—that can sometimes follow,” says Flournoy.

Flournoy also invited two of his musical friends to help add a few sonic splashes to some of the songs. Singer-songwriter Courtney Jaye can be heard adding ethereal background vocals to three tracks (“Diamond in the Dark,” “Sara Now,” and “Nervous Wreck”), while talented multi-instrumentalist Meg Duffy (Hand Habits, The War on Drugs, Kevin Morby) added some shimmering guitar work to “Diamond in the Dark” and “Sara Now.” “Rob had this weird, old-school approach where there was no punching in, so if we were seven-eighths of the way through a song and something fucked up, we did the whole thing again from the top,” laughs Flournoy. “Pretty much everything you hear on the record is one take.”

Listening through Heartbreak City, it’s clear that relationships—both good and bad—proved to be fertile songwriting fodder for Flournoy to address the multi-layered cause-and-effect motifs of dismissal. Rumble-drummed rockers like “Asked & Answered” and “The Long Goodbye” were birthed from breakups, while the title track celebrates Los Angeles and its ability to provide a haven of self-seclusion. By contrast, the feedback-drenched love song “Nervous Wreck” finds Flournoy at his most romantically hopeful: “That song might be the one song on the record that’s a portrait of something I wanted—to both find love and also believe that I was worthy of love.”

“That idea of being worthy of love was one of my central struggles after I got sober,” states Flournoy. “I got sober—which was great, and my life improved dramatically—but then I had to face the issue that probably caused the drinking in the first place.” After the release of Apex Manor’s 2011 debut The Year of Magical Drinking, Flournoy hit a wall and decided to move home to Memphis, TN, and check into rehab with plans to head back to Los Angeles upon its completion. However, his father—who Flournoy playfully calls his “sober Sherpa”—had just started a homemade pimento cheese business that was quickly taking off in the local farmers markets and grocery stores. “My dad showed me how it was possible to live without drinking—which was an impossibility in my mind—and I started helping out with the business,” says Flournoy, who ended up staying in Memphis for two and a half years. “It was the most profound shift in my life, and I never saw it coming.”

Even with his newfound sobriety and the success of the pimento cheese business taking up a lot of his time and energy, Flournoy never stopped making music while in Memphis. He got work composing instrumental music, scoring a web series, and he even wrote the theme song for the CNN daily news show The Lead with Jake Tapper. The music-without-lyrics part came easy for Flournoy, and the anonymity was an enticing draw as he learned to navigate a life without alcohol.

Finally, in 2016, two years after moving back to Los Angeles and scoring a couple of movies and a short film, Flournoy wrote his first new Apex Manor song since The Year of Magical Drinking. “It took me five or six years to learn how to rewrite songs, or at least how to write them sober. But in a span of nine months, I wrote something like 35 songs,” smiles Flournoy. Which brings the story back to Heartbreak City and its vibrant and energetic collection of songs. But just in case you’re expecting tuneful tropes about the existential insights uncovered in rehab, the unique power of familial bonds, or even pimento cheese, Flournoy wants to save you some time. The 11 tracks on Heartbreak City deal with universal topics (break-ups, selfishness, relationships) and extemporaneous abstractions, both of which are parameters that welcome listeners in and allow them to apply their own meanings: “Some songs I write are more about a feeling or an atmosphere that I’m trying to evoke. The clarity of the narrative is not as important to me as how the sound of the words dance with the melody and the music.”

For Flournoy, the release of Heartbreak City is not so much a literal culmination of the dramatic twists and turns that transpired over the last eight years between Apex Manor albums, but rather a celebration of the place that those events led him to: “I didn’t want to try to track the journey verbatim. Rehab, the pimento cheese business, living life without alcohol—all those things were means that allowed me to get to the end result of being in a place where I could write songs again. This thing that I feared might be gone forever finally reemerged, and I feel profoundly lucky.” 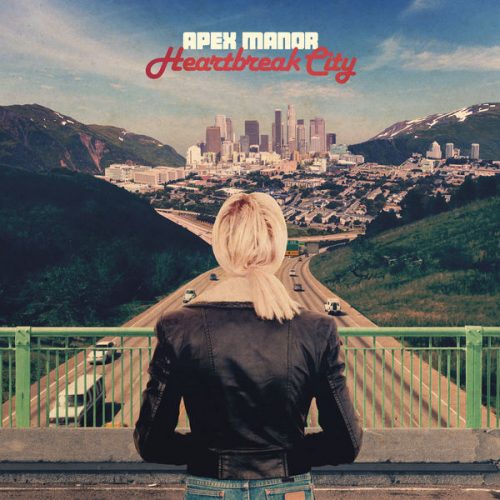